Psychics and Pineapples, A Review of Psych: Cross-posting with The Catholic Geeks 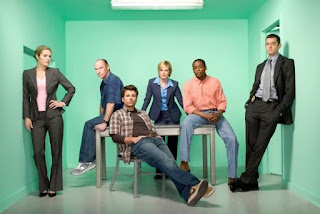 Posted by Olivia at 2:10 PM No comments:

I laughed so hard at this.

Instant classic in my book.

Well, This Has Happened - Allergies!

It was been over a year since I published anything with my last post about a new project I was about to begin. As we can all see that did not happen. I wanted to start on a sewing project using the pattern shown previously. But I was too big for the largest size in the pattern and I shelved it for another time. Then Life, as it normally does, got busy.

Earlier this year I spent Lent focused on improving my prayer life and examining the state of my health. I asked myself if I was taking care of my physical and spiritual self. The answer - I can do better.

Cue going to my Doctor!! Who, by the way, is a wonderful, wonderful lady!

For quite sometime (High School was when I first really noticed it) I have had swallowing problems. It was hard to get food down; meats, breads, pies, fruit - it was annoying because some days I did not know if my lunch would go all the way down or decided to about face and greet my mouth again. About six years ago, to fix this problem, I had to go in for an upper endoscopy with dilation surgery. An out-patient procedure that took only the morning and I slept for the rest of the day. Everything was fine; food was going down without a problem, I didn't have to worry about choking in front of people and having to explain what was wrong.

However, it was not to last. Slowly over the years and before I realized it, the swallowing problems returned. Not with a vengeance, mind you, just returned. So with this returned problem my doctor referred me again to have the same procedure again.

It was pretty much the same as before, but this time they found something. I don't know if it was there before and it wasn't as noticeable or it has developed since. Maybe both.

I have Eosinophilic Esophagitis or EoE, which is the fancy term for a build up of white blood cells in the lining of the esophagus in reaction to acid reflex, food or allergens which stiffens it causing difficulty swallowing.To be on the safe side, since the EoE could be from something that I'm eating, it was decided that I should go visit an allergist.

I did and one skin test later I have allergies!!!

Granted I knew I had some environmental and seasonal allergies (I always sensed during the first blooming of Spring), and I suspected almonds since I would get that weird itchy sensation in the back of my throat when I ate them. So with environmental I am pretty much allergic to EVERYTHING that grows where I live. (to quote my nurse - "You're allergic to all the things!")I even had to get some special bedding because I 'scored' rather high for dust-mites.

And I do have a issues with food - with eight different food items.

I am allergic to pecans and oat grain. I have sensitivity to wheat, almonds, soy, corn, shrimp, and cod.

Going into the skin test I knew I would have at least one or two food allergies, but I was not expecting eight. What makes it even more "interesting" is the combination of everything. No, really - it's interesting.

Since then I have researched what foods I can and cannot have, especially at different restaurants. I am no stranger to reading the ingredient lists when food shopping due to my younger brother being allergic to egg. So with that habit firmly established I just have to included my own newly discovered allergies. I have to count the location of where my food sensitives fall in the ingredient list; as long they are not the first four items I should be good since it is such a small amount. While I do not have a problem with gluten, I am getting gluten-free bread. I did take a look at darker bread like rye and pumpernickel, but there is still a decent amount of wheat in them. But I do have to be careful with gluten-free bread is that sometimes the alternative flour used is almond and/or soy. That is a problem I run into a lot - if something doesn't have wheat, it may have almond or soy as an alternative.


Soy and corn annoying me to no end!!!They are in practically everything that is processed as an emulsifier most of the time. While I am told that when corn and soy are processed into the lecithin or syrup the allergen is taken out. But I am working on significantly reducing my intake of them just to be on the safe side.

The thing that bums me out the most is that it will interfere with my baking. I love to bake! It's the way I de-stress  and I love to bake for other people. I also enjoy baking old family recipes.

My mother has an old, nearly falling apart small black binder containing family recipes written down by my great-grandmother. I have so much fun with them! Many of them do not have instructions, just the ingredients and the amounts for each. Sometimes there will be maybe one sentence that's a special note. It makes a bit of sense for me why that is since at the time many mothers already knew 'how' to make something and the variation came in 'what' was put in.

Now I begin my journey relearning what I can and cannot eat. Hold on tight - it's gonna be a bumpy ride!!
Posted by Olivia at 11:40 AM 1 comment:

A preview of what's to come. 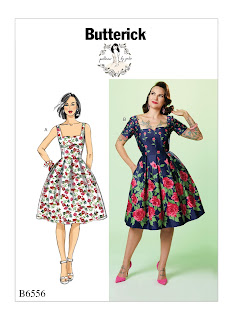 A Cross Posting from 'The Catholic Geeks'

My response to 'Christmas is Pagan'.

The Roots of Christmas: From Pagan or Not From Pagan

Posted by Olivia at 7:51 PM No comments:

These articles are on the St Joseph Catholic Church in downtown Macon, GA from the Macon Telegraph. 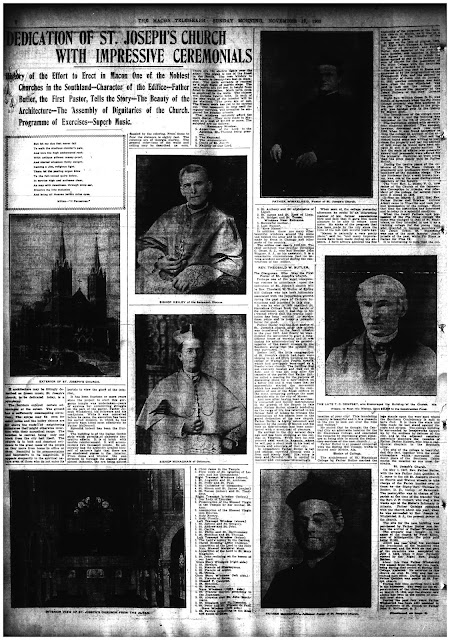 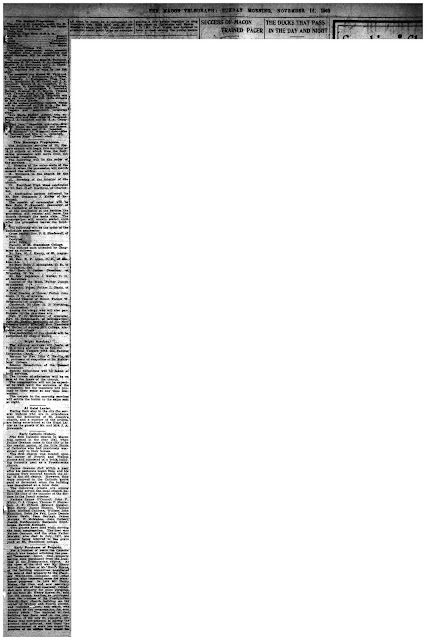 These articles are on the First Baptist Church in downtown Macon, GA from the Macon Telegraph. 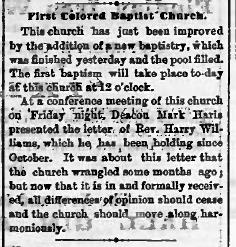 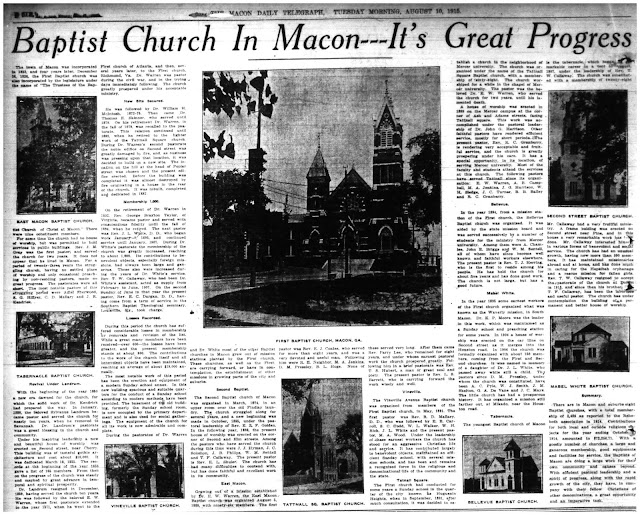 These articles are on the First Presbyterian Church in downtown Macon, GA from the Macon Telegraph. 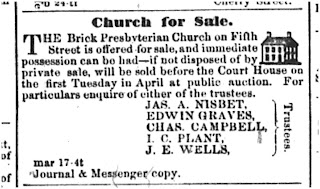 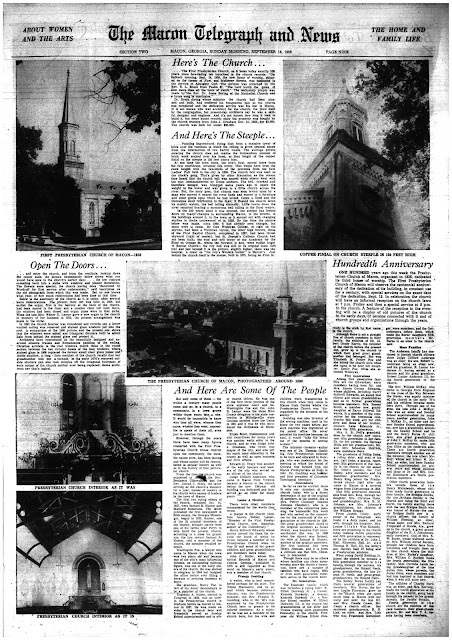 Posted by Olivia at 9:44 AM No comments:

These articles are on the Mulberry Methodist Church in downtown Macon, GA from the Macon Telegraph. 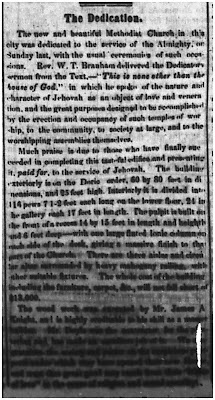 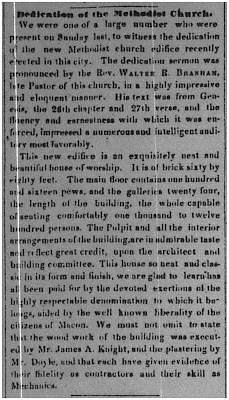 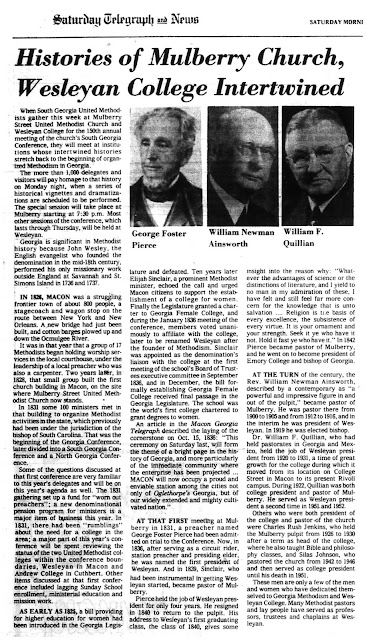 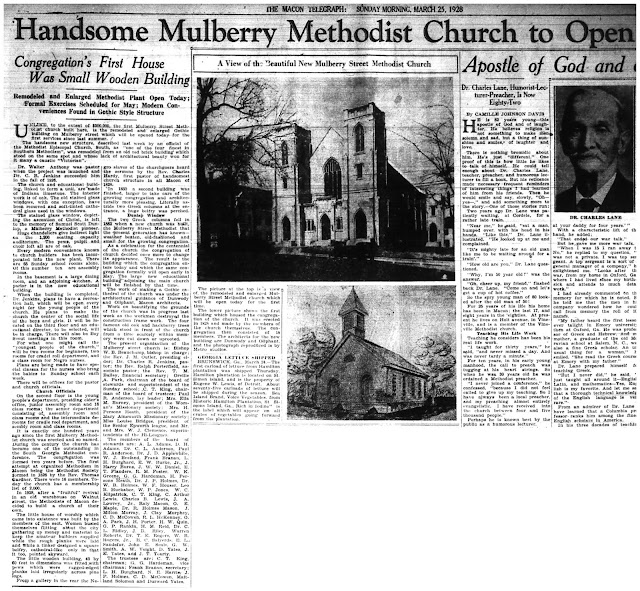 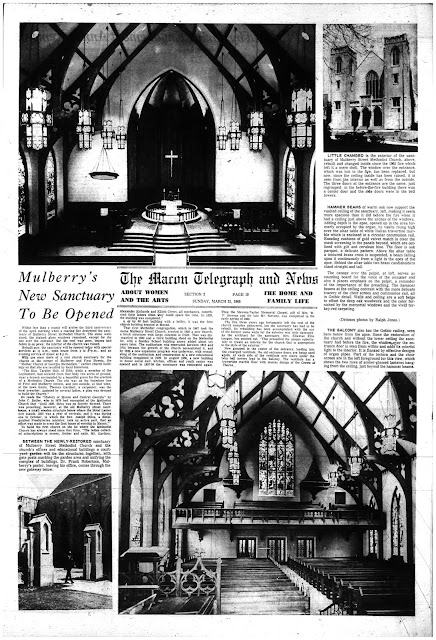 Posted by Olivia at 9:37 AM No comments:

These articles are on the Jewish Temple in downtown Macon, GA from the Macon Telegraph.
Please do not reuse without citing. 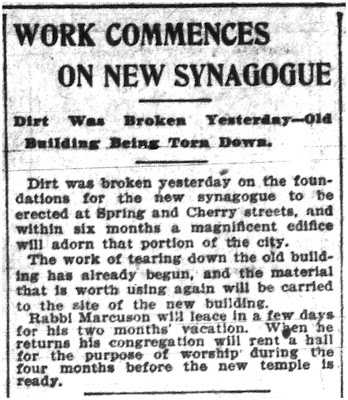 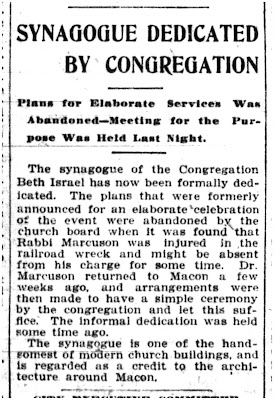 Posted by Olivia at 9:34 AM No comments:

As with the pictures I am posting scans of historic newspapers for my digital collection for class. These scans were procured at the Middle Georgia Archives from their microfilm collection.

These articles are on the two Baptist churches in downtown Macon, GA from the Macon Telegraph. Please do not reuse without citing.

Posted by Olivia at 9:14 AM No comments:

Another batch of pictures.

Posted by Olivia at 3:41 PM No comments:

For my final project for my Digital Curation class I have to create a digital collection. I have decided that I will do a collection on the religious buildings in Macon, Georgia. This was inspired by the quote:


So this post is a place holder for all the pictures I have taken for my collection. (© O. Bushey 2017)

Posted by Olivia at 8:42 PM No comments:

The things I find on the internet.

Olivia
"I believe in getting into hot water; it keeps you clean." -- GK Chesterton

How the Wanderer Muses

I am a wanderer.

We're all on a journey whether we like to admit it or not. On this journey we learn, grow, laugh, sigh, cry, believe, hope -- but overall we're all trying to find the truth. This is my journey as I find the Truth in Creation. My laughs, joys, sorrows, and cries will only be glimpsed upon in this blog, but I do hope that it will give you something to think about as you go on your own journey.

So welcome to 'The Musings of a Wanderer'.